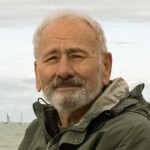 Andy Jampoler lives in Washington, D.C., with his wife, Suzy, a geographer and cartographer.  Until recently, Suzy has raised seeing eye dog puppies for New York’s Guide Dog Foundation for the Blind.

Andy is an alumnus of Columbia College and the School of International and Public Affairs, both of Columbia University, in New York City, and of the U.S. State Department Foreign Service Institute’s School of Language Study.

After completing flight training, during twenty-plus years on active duty in the U.S. Navy that followed, Andy served on the personal staffs of the chief of naval operations, the secretary of defense, and the commander in chief of the Pacific Fleet, and also on the ground in Vietnam.  He commanded Patrol Squadron Nineteen and Naval Air Station Moffett Field.  Later he was a senior sales and marketing executive with German and American aerospace companies.

Andy has been researching and writing non-fiction books for the past twenty years.  A review in the Wall Street Journal described his first book, Adak, The Rescue of Alfa Foxtrot 586, as “an adventure story to rival the best you’ve ever read.”  His seventh book from the Naval Institute Press, Embassy to the Eastern Courts, about the secret missions in the 1830s that constituted America’s now forgotten first “pivot toward Asia” during Andrew Jackson’s administration, was published by the Press in November 2015. His most recent book, which is about the short life and sudden destruction of the cruiser USS Memphis a century ago, will be published by the University of Alabama Press in 2022.

Andy has given illustrated talks on the subjects of his books, articles, and historical research to audiences at the Library of Congress, the National Archives, at the Smithsonian Institution, and other museums in the U.S. and abroad, also at embassies and academic symposia, in book stores, and on board cruise ships sailing the oceans of the world.  Some are available on the website of C-SPAN TV.