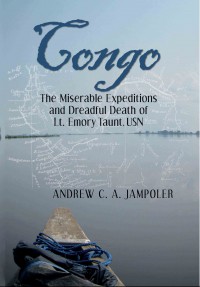 In May 1885 Lieutenant Emory Taunt, USN, left his ship at Banana Point, at the mouth of the Congo, and began a one man exploration of the river from the Atlantic Ocean to distant Stanley Falls, Kisangani today, stopping on the way at stations built by the famed explorer Henry Morton Stanley. He was the first American to penetrate so far into “the heart of darkness.”

Taunt’s mission was to see what opportunities there might be for American manufacturers and traders in King Leopold II of Belgium’s new state. Washington wanted to ensure that Americans shared in markets already being probed hungrily by Europeans.

His career in the navy until then had not been a brilliant one, despite his acknowledged expertise in seamanship and gunnery, and the fact that his father- in-law was an admiral under whose command Taunt frequently served.

His problem was intemperance. Taunt drank too much.

Drink and tropical disease would afflict him again and again: next when he went back to Equatorial Africa as the civilian chief of a short-lived ivory exporting business; and finally when he returned to the river at the end of the decade as the State Department’s commercial agent. He died there in January 1891, victim of his failings and the dreadful conditions along the river.

“Congo” is the true story of Taunt’s life and death during the decades when European colonialism first erupted in Central Africa, peopled by a fascinating cast of characters that includes a constellation of greedy politicians and businessmen, and three hugely popular authors. All of them, like Taunt, had an interest in Africa.

As part of the research for the book, in 2011 Jampoler and his son spent five weeks in a small boat traveling 1,400 miles down the Congo River from Kisangani to the Atlantic Ocean.

“Congo,” the author’s fifth book, was published by the Naval Institute Press, of Annapolis, Maryland, in 2013.